I am ashamed to admit that I only just finished Mushibugyo (last Saturday). I can’t believe this little gem went totally under my radar when it was airing in Spring and Summer.

I picked it up last weekend after I saw Draggle’s post. Anything that gets a B from him is normally worth watching but a dumb Shonen with some incredible romance? Oh, I am all over that. 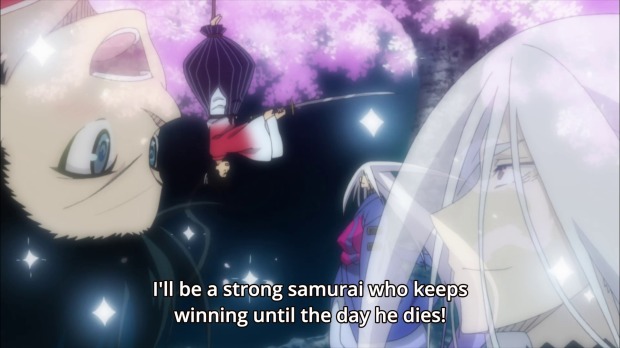 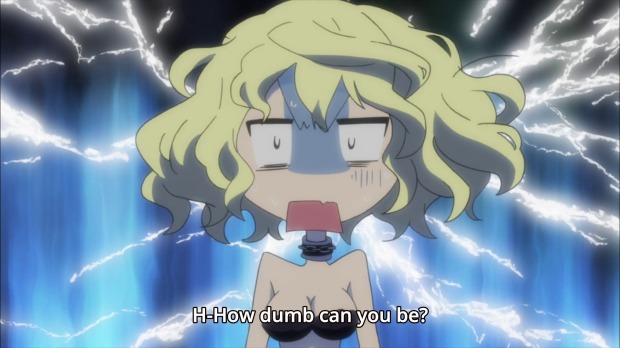 There isn’t much of a plot per say to Mushibugyo. The initial episodes are simply “kill a bug a week” and serve as introductions to the characters, provide insight into their past and develop the relationship between Magistrate members and Jinbei.

Later on, the anime goes into 2 individual arcs and both arcs are standard “split up and fight an enemy each” affairs and both focus on the development/back story of the Insect Magistrate.

The plot did seem quite confusing at times since little backstory was given and it didn’t really feel totally resolved by the end. Who exactly are Insect Hunters? Why were they interested in the Magistrate? What happened to the Insect King? etc, etc…

That said, like I alluded earlier, this anime was about the characters doing goofy things and fighting bad guys. The plot gave us plenty of that so it is all good.

I loved the colors used in this anime. They were so vibrant and uhh, colorful. It had a nice, distinct art style. Even though the anime often involved brutal fights and lots, lots of gore, I honestly felt the vivid colors worked much better than a gritty style would have. 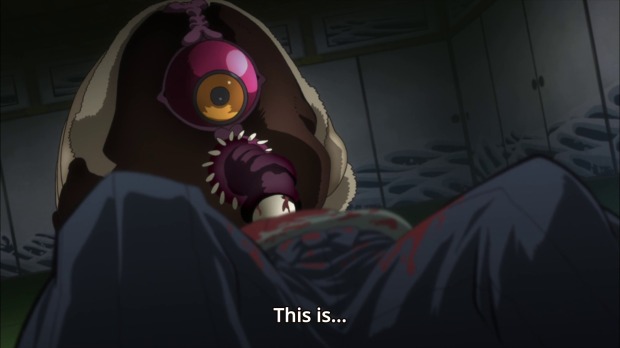 It was quite gory at times.

The visuals did a good job of matching the overall goofy (yes, people died left right and center but it was still goofy…) tone of the anime. I am particularly fond of the visuals employed in the opening/ending sequences. The first opening in particular had great colors. 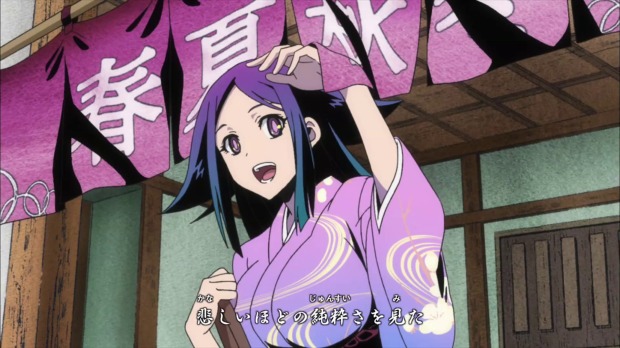 I love these colors.

Yeah, there were a few scenes that were not so well animated and a few places where the characters were not super well drawn but whatever.

An example of a somewhat badly drawn scene (flat character). Not too comon though.

There really is no better word to describe it. The soundtrack in Myshibugyo is probably not the greatest thing since sliced cheese but it is pretty damn solid. I didn’t notice most of the insert music but the few songs I did notice were pretty great.

As a general rule of thumb, openings hype you up for an anime and endings sooth you away from the week’s episode and try to provide some final closure.

Both openings do their hype job damn well but from a functional perspective, the endings really shine. Both endings carry with them an incredibly melancholic almost nostalgic melody. I love them.

It is almost a shame that there was a preview after the ending song because I wanted to fall asleep to those songs. Both ending songs were great and the accompanying visuals were very well chosen. I am especially fond of the first ending.

I didn’t like the music in the first opening but it suited the anime quite well.  And the second opening? Absolutely incredible. I can’t get over it. It is probably one of my favorite openings this year. 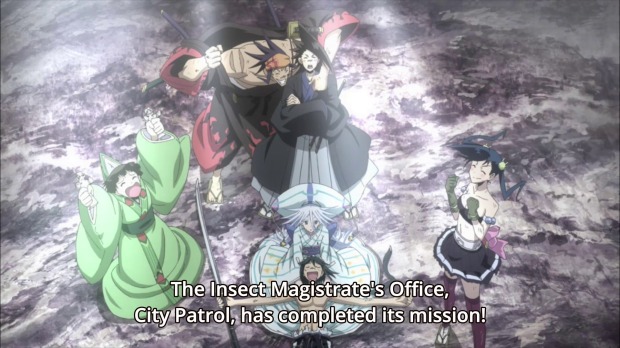 I love that enthusiasm.

Jinbei is a hot headed protagonist that shares much with the average Shonen hero. He “never gives up”, he wants to protect and is quite the idiot.

That said there are a few things that make him an above average Shonen MC. 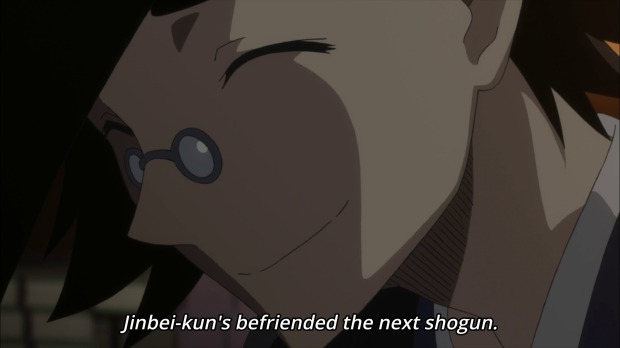 Jinbei made friends with everyone.

I really liked how Jinbei was genuinely hard working. He never stopped trying to improve himself. He never complained and he approached everything with unrivaled enthusiasm. Arguably my favorite thing about Jinbei was that he believed in creating an illusion of strength.

He didn’t just want to protect people, he wanted to comfort them and be strong enough that they would feel at ease in his presence. I think that is a somewhat unique outlook on life and strength.

Sure, his antics were a bit tiring at times but he charmed me and in the end, that is what is most important.

(If I had to compare him to other characters, his enthusiasm and training ethic is similar to Gon or Luffy but he is more of a good guy than either of those two.)

Fucking badass. I am a sucker for a good, mysterious bishie so I naturally liked Mugai.

Hibachi was pretty cool. She provided a good amount of fan service (though it was more funny than it was sexy most of the time) but she was still a pretty well written character.

She didn’t feel as strong (combat wise) as some of the others but I have no real complaints. 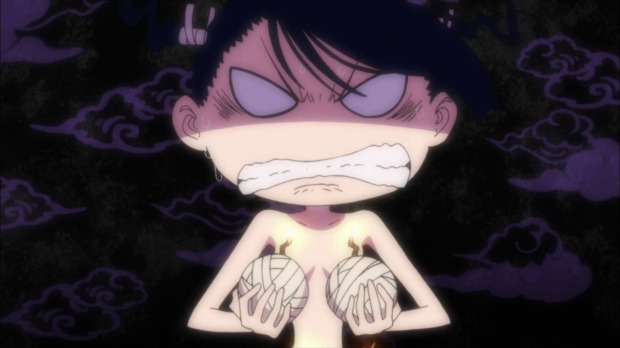 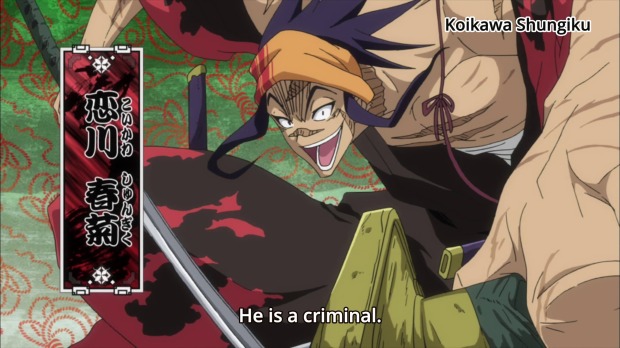 This guy was a bit too crazy and dumb at times but all in all, he was quite the loony badass! It is kind of interesting how one of the most important characters in a Shonen was actually a former criminal and a murderer at that to.

His back story brought up some interesting ideas of redemption, forgiveness, revenge and guilt. I liked that. His final fight with him admitting that the weight of the dead never goes away was fantastic.

Tenma was probably my least favorite protagonist. I mean I didn’t hate him but he was just not as interesting as the others and his attack (full power punch) got boring quite fast. He was pretty adorable at times though. 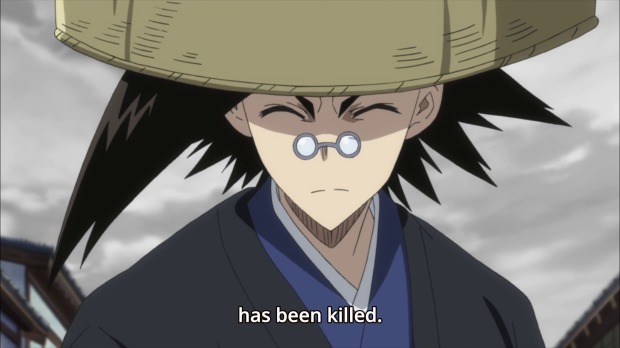 This guy. The quite, seemingly weak bookwork who is actually super strong. That’s a great trope and he applied it well! 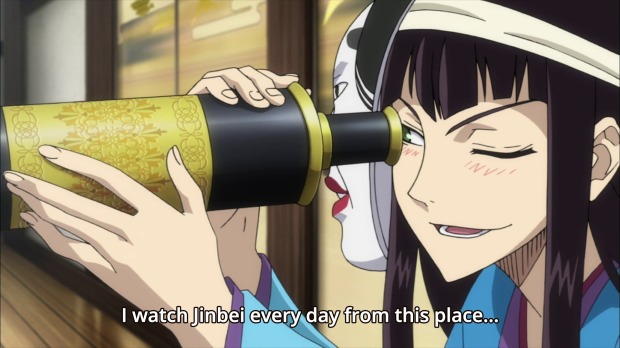 I never failed to crack up at Natatomimaru and his adoration for Jinbei. He was hilarious.

I am not really sure why I fell for Naa but I did and I fell hard. 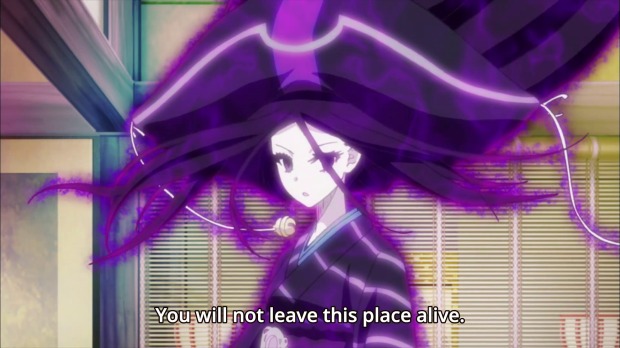 Her overpowering strength was so cool.

Maybe I was one over by her tragic past. Her back story was quite sad and yet it never felt overdone. It felt like it hit just the right strings. 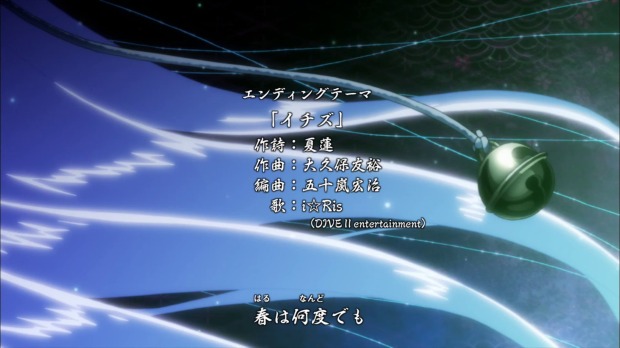 Just seeing her hair and chimes billowing like this gave me a lovely, melancholy feeling.

Actually, the anime definitely did something right in her presentation. Everything from her character design to the occasional glimmers of her hair blowing in the wind to the chime of her bells, everything created a melancholy feeling.

It is hard to describe but basically her character was very well made and well presented character. Her character as well as her relationship with Jinbei won me over.

I don’t have much to say about the bad guys because for the most part, they had very little development to them. They existed to be defeated. That said, most villains were pretty colorful and quite different from one another so that was good. A few of them were quite funny to.

I was especially fond of the Insect Hunter that wanted to die and the JUSTICE BUG. 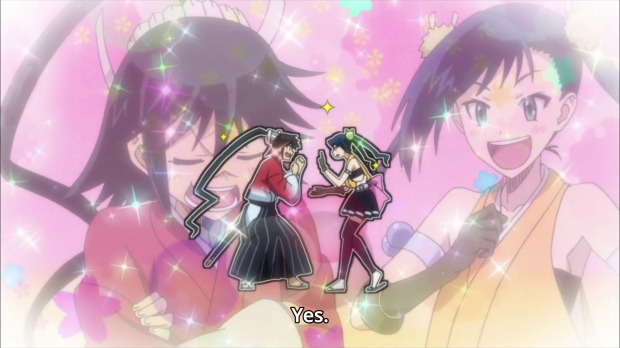 Not bad. Aside from the romance, the relationships were relatively shallow but they existed and they never really felt out of place. It was nice seeing all of the characters grow fond of Jinbei.

I really liked some of the faces they made. The perverted faces were especially funny.

I liked the character designs a good amount. Like the general visuals, the characters were colorful, interesting and looked different from one another.

It is still kind of surprising to me, but I honestly can’t think of many good anime romances. I mean, we get lots of harems and romcoms but there is very little genuine, heartfelt romance to be found in anime.

This is surprising because good romance manga are incredibly common and quite popular to.

Does Mushibugyo hit that genuine, heartfelt anime romance I desire so much? I hesitate to answer that with a yes because the romance doesn’t conclude! No one is a couple by the end unfortunately.

Does it come close though? Yes, yes it does.

I was looking for romance right from the get go (because Draggle mentioned it) and at first, I was sure that it was Oharu who would end up winning Jinbei’s heart.

Then Hibachi came into the picture but my finely tuned, ship navigation system ignored her completely and classified her showcases of romantic interest as “comedy”.

And then the magistrate entered the picture. Unlike Jinbei’s vision of the ideal magistrate (a super buff man), she was actually a small, pretty girl (SHOCK. SURPRISE). Her relationship with Jinbei immediately captured my heart. 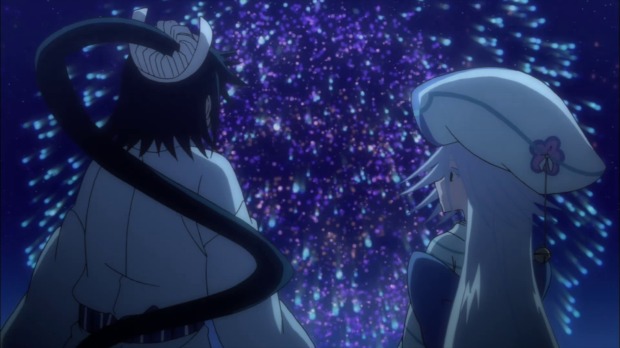 Every episode I watched, I hoped to see a bit more of Jinbei and her. I really did. 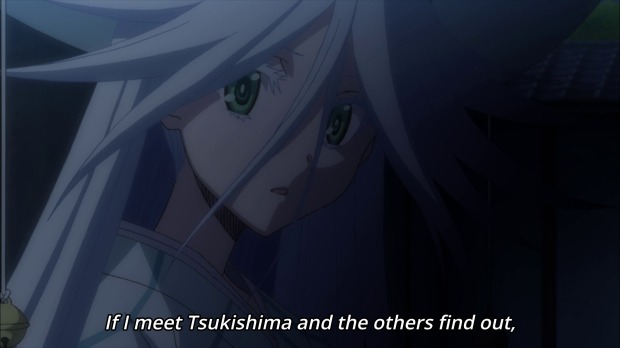 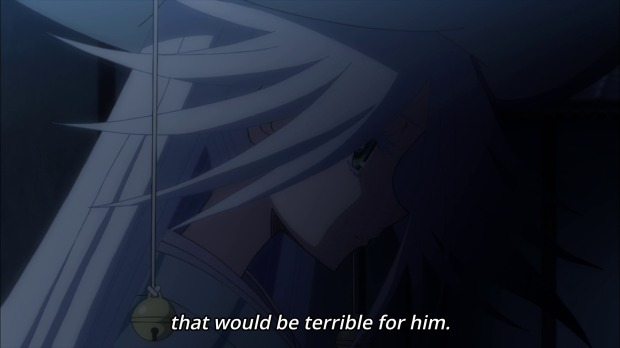 At first, she didn’t want to hurt him with her poison. Then, once her poison went away, she was still hindered by the difference in their positions. And yet, she still sought him out and did her best to make memories with him. She did her best to hold his head and to cherish his warmth because she knew it would not last. 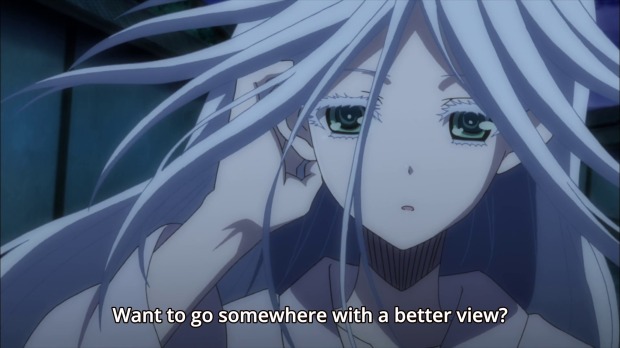 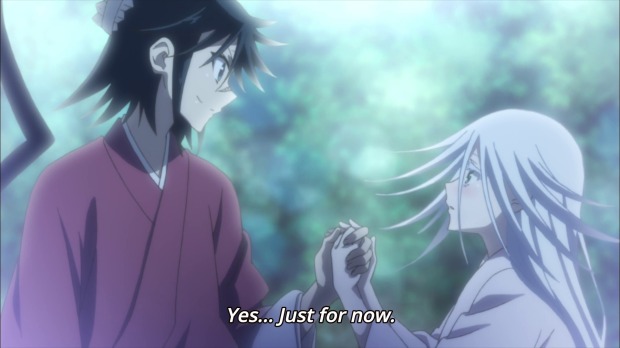 Why did Jinbei not fall head over heels in love with her? Why did they not kiss? WHY!?

Why did this show not end with an older version of the two walking down the street escorting their adorable half-insect children? WHY? 😦

Agh, it was so great. I really want more though! 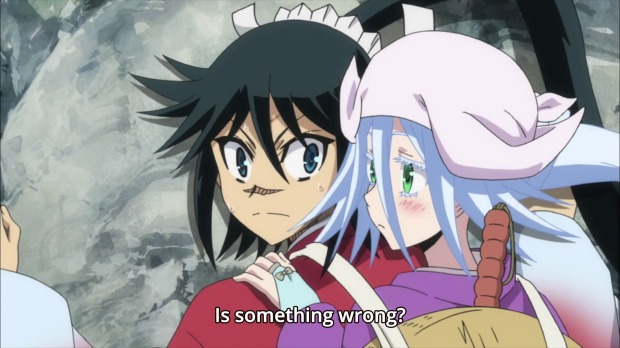 I was a bit meh on the ending to be honest. It felt a bit rushed and well, they left quite a few things unanswered. That said, it was not a bad ending to an arc and an acceptable way to close the season.

Sure, it was kind of cliche (I WILL NOT DIE UNTIL I BEAT YOU) and overdone (as befitting a Shonen) but you know, that kind of dumbness works well in this anime so I am content with it.

Yes, I made this gif. I am pretty proud of it.

I want a 2nd season 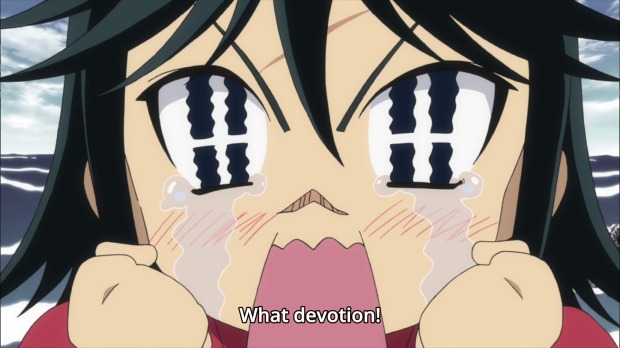 Come on, you know you want more faces like this.

I mentioned this several times throughout the post but many things in the anime felt incomplete.

I really liked Mushibugyo. I don’t think it was the best anime to have aired this year but it was probably the most undervalued/underrated anime to air this year.

It was funny, well put together and all around quite solid. On top of that, it definitely featured one of the best romances this year.

Like most anime, Mushibugyo isn’t for everyone and you know, that is a real shame. Mushibugyo has a lot of heart, authenticity and genuine love to it and I think we could all use more of that in our anime.

I took about 2960 or so screenshots while watching this. Naturally, it would be a shame if the best ones didn’t get used here.I do apologize for wasting your bandwidth like this. -_-‘ 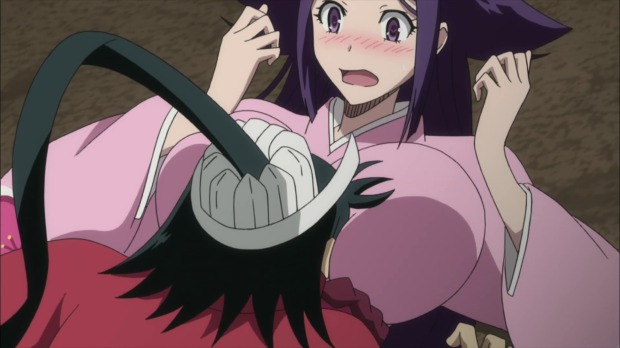 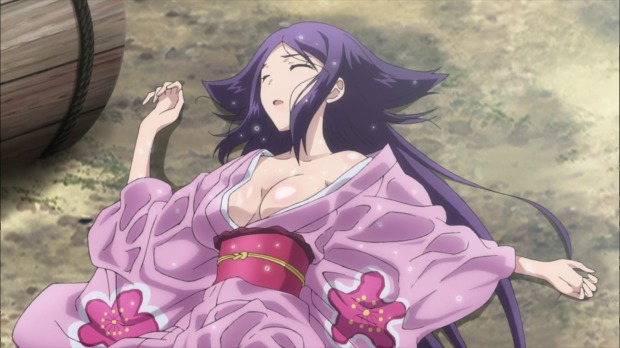 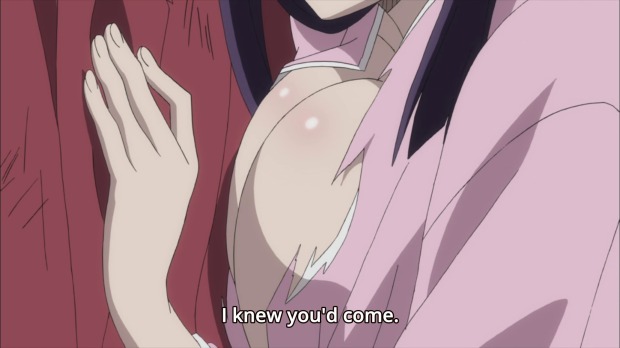 This happened to poor Hibachi quite often.

Look at that smug smile. It is totally on purpose.

This kid will grow up to be quite interesting. 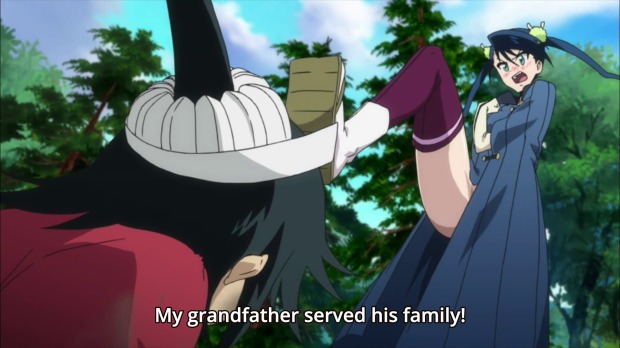 This fight lasted for over a year and lead to a marriage and childbirth…during the fight itself. I love this show. It is hilarious. 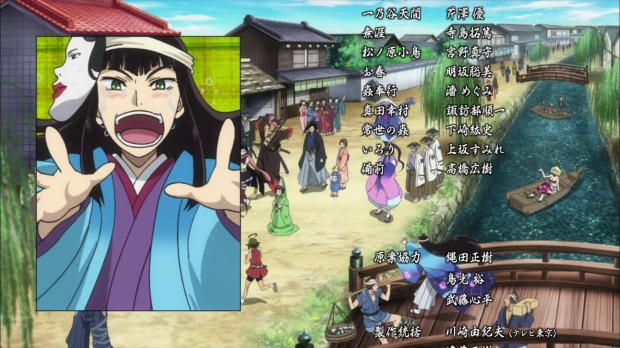 Ship, ship, ship and not just because they are on a ship. 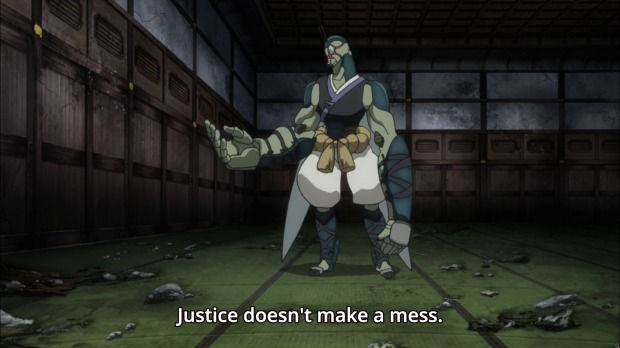 This guy was a badass. He had a great death. 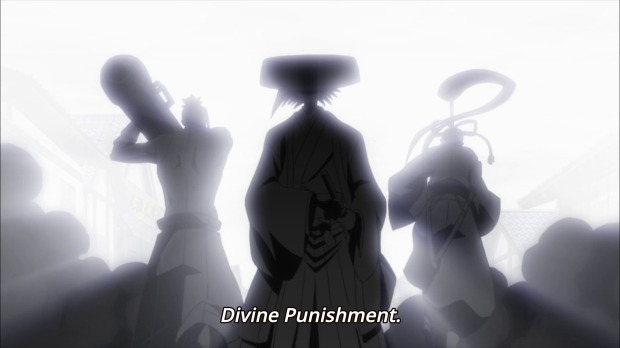 The composition of that last image and the image right before that is absolutely divine.

This entry was posted on October 29, 2013, 2:00 pm and is filed under Anime, End of Season, Mushibugyo. You can follow any responses to this entry through RSS 2.0. You can leave a response, or trackback from your own site.